Orange County has built a notorious reputation for being one of the best places to live in California. Who wouldn’t want to live in one of the country’s premier vacationing epicenters boasting fun and relaxation?

In fact, nearly half a million new residents moved to California in 2018 alone. The majority of people moving from out-of-state came from densely populated urban cities including New York City.

Orange county is now home to over 3.1 million residents, making it the third largest county in California. With its sunny weather, pristine beaches, and upbeat culture, it's no surprise that people are flocking to live in one of the Golden State's most popular areas.

The culturally rich northern part of the county such as Brea, Placenta, Fullerton, and La Habra enjoy the benefit of being the closest to Los Angeles, while southern residents take advantage of the beautiful landscape which includes rolling hills and mountainscapes.

No matter where you go and no matter your lifestyle, Orange County is the perfect place to call home. Here are some of the top 10 best places to live in Orange County, CA. 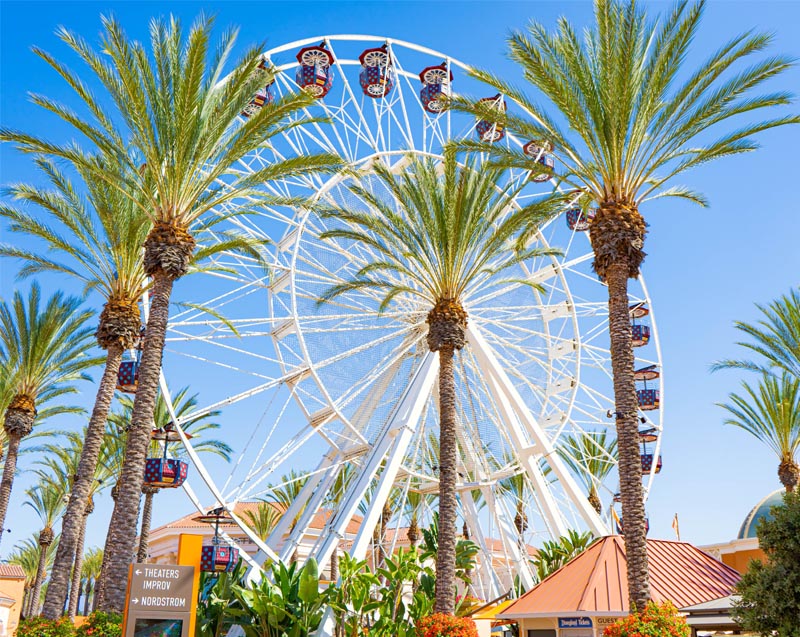 Home to the University of California, Irvine is an exceptional city with plenty of open space to explore. Not only is it perfect for single families, but its business park district is also the perfect place for younger professionals to grow their careers.

Irvine has received numerous accolades over the years including the Best of OC Award by the Orange County Register. Neighborhoods including Turtle Rock, Westpark II, and South Irvine have also been labeled the 2021 Best Places to Live in Orange County.

Notorious for its top-quality public schools, rich culture, and diverse population, Irvine is also one of the safest cities in all of America for its size according to the FBI Uniform Crime Reporting figures. 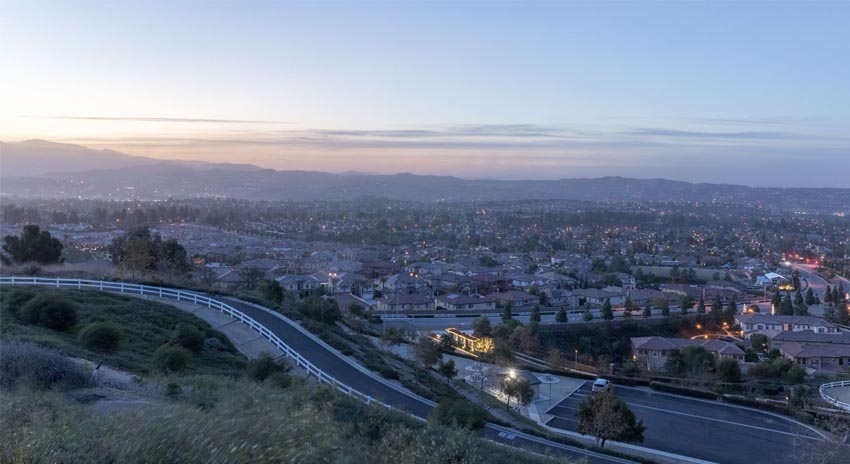 For those looking to get away from the bustle of the city and find that quiet, spacious suburban home, Yorba Linda is the perfect place for you.

Referred to as the “Land of Gracious Living,” the community sits on hundreds of miles of maintained trails and parkland that makes this city an outdoor paradise.

Despite how open the area truly is, you never lose out on that cozy, hometown ambiance. After enjoying the local Jessamyn West or Box Canyon Parks with the kids, hop on over to Stefano’s Gold’n Baked Hams, known for its artisanal subs and sandwiches.

Need to meet with a client or clock into work for an hour or two? No problem! Yorba Linda is the perfect place where work-life-balance gains new meaning as most people work remotely.

In fact, nearly 10% of the entire workforce works from home, ranking higher than most areas in the country.

With a strong job market and low crime rate, it's no secret that homes in this area go for a bit more money. But most residents would agree, it's certainly worth the price tag. 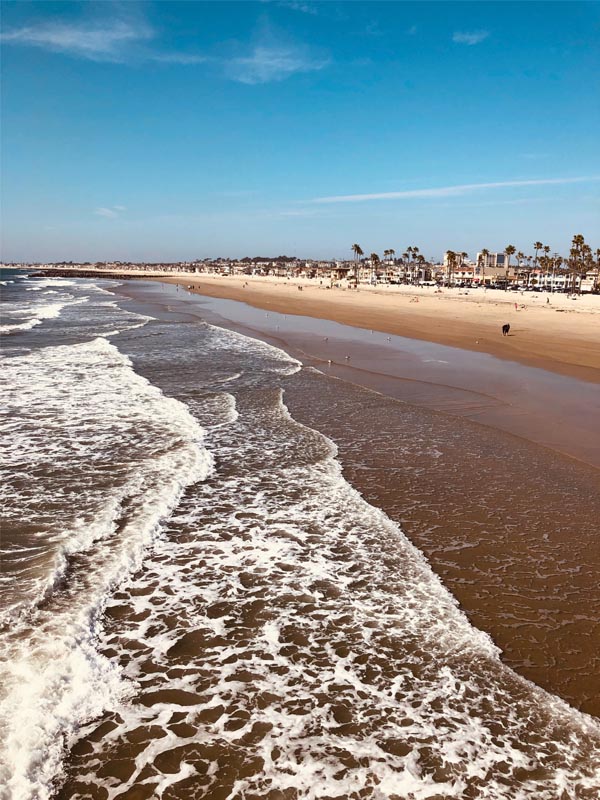 While there are many beautiful cities home to many beautiful beaches throughout Orange County, Newport Beach is arguably the best of the bunch. Uniquely positioned along the coast, enjoy immaculate views from your luxury waterfront home.

Much like other coast towns across Orange County, Newport Beach accommodates the perfect work-life balance lifestyle since the weather remains nice for much of the year.

Top attractions include Crystal Cove Park and the Wedge. While tourists gravitate toward the Balboa Fun Zone, it's also the perfect place to change up your routine and have a bit of fun!

If you ever get tired of the pristine sand or artificial islands, it's easy to get away to more urban epicenters including Irvine which is only 9 miles away. However, most residents find it hard to leave the sensual sunshine and whitecapped waves, perfect for sunbathing or surfing. 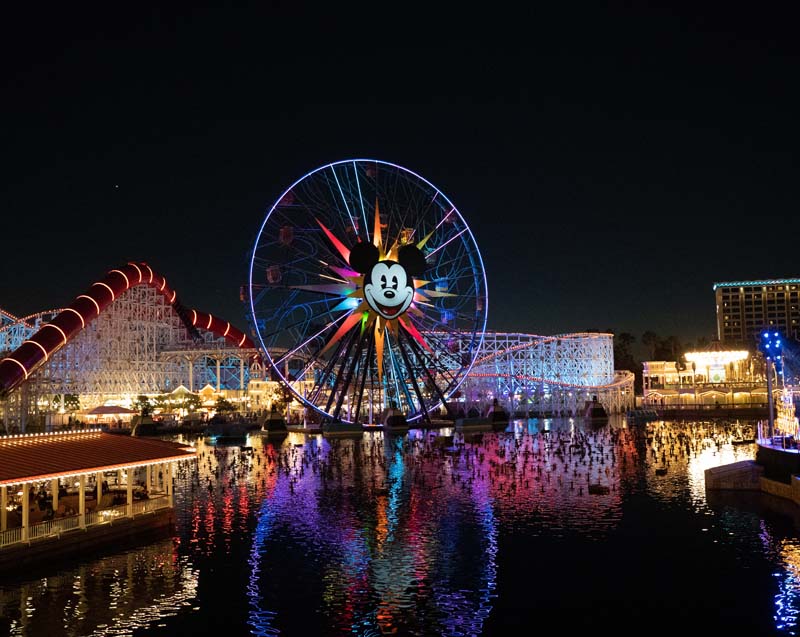 Home to Mickey Mouse and the Mighty Ducks, there is something for everyone in Anaheim, CA. Most of the area is home to planned, quiet neighborhoods and communities like Anaheim Hills secluded around the Santa Ana foothills.

On the other hand, downtown Anaheim is bustling with culture, offering a slew of amenities from restaurants, shopping, and sports, to an abundance of outdoor activities.

Compared to other areas throughout Orange County, Anaheim’s average median income sits lower at about $71,000, with an even mix of residents who rent and who own homes. It retains a good mix of urban and suburban homes.

Northwest Anaheim maintains a more pronounced suburban-family feel, while southwestern Anaheim’s atmosphere is more touristy, probably due to Disneyland. Both areas are safe and have great school systems. 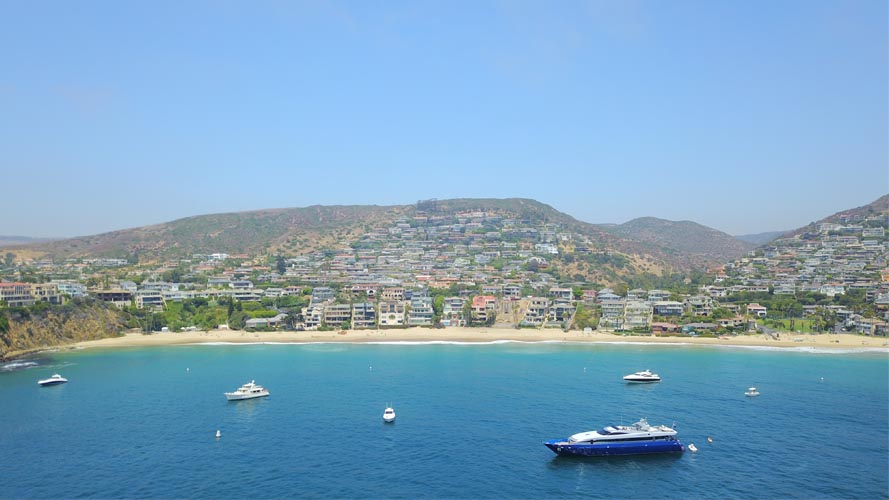 There is something to be said for a city that can draw in a television audience with a cult following. However, Laguna Beach is so much more than people see on the surface.

Home to many of Orange County’s designers and artists, the city artfully nestles into the rocky coast and is perfect for small-town living.

Shaking off the transient vibe that puts other Southern California cities to shame, Laguna Beach is home to a multitude of modern luxury homes. But don’t let that fool you. If casual living is more your style, you can still find that cozy beachfront cottage to call home.

One of the biggest events of the year enjoyed by residents and non-residents alike is the Pageant of the Masters, an annual art festival that pays homage to some of the world’s greatest works of art.

So, whether you want to enjoy the surf, hike the surrounding mountains, or admire one of its many galleries, Laguna Beach is easily one of the more eclectically popular destinations you can call home. 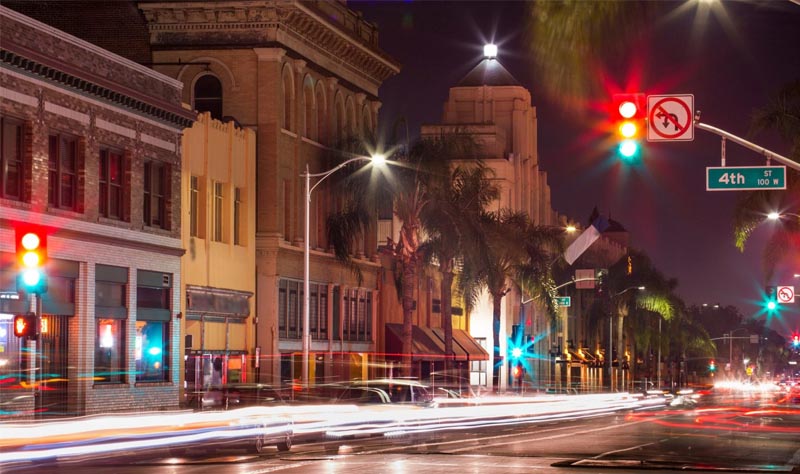 Founded in the 1800’s, Santa Ana has a rich heritage that most towns throughout Orange County find envious.

Santa Ana is often perceived as one of the area's financial hubs, despite competing with the accelerated growth other local cities like Irvine have seen in recent years.

The city’s downtown is home to both historic homes as well as multiple fine retail and dining establishments. Since the city sits near both Irvine and Costa Mesa, it is perfectly centered for those looking to take advantage of local attractions hosted by its counterparts.

For example, Newport Beach is only a 30-minute drive away. Similarly, Disneyland and Adventureland are a manageable 15-minute drive. Want to take a trip to the big city? A day trip to the greater Los Angeles area can be made in record time.

Due to its rich heritage, the city retains an affluent Latino cultural influence combined with a unique coastal flair that is sure to please any lifestyle. 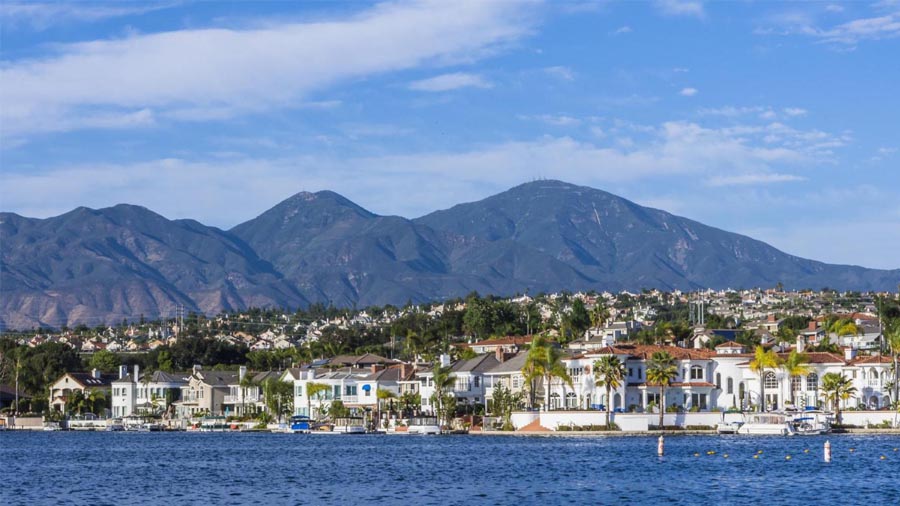 Perceived by many as a commuter city smack dab in the Saddleback Valley, Mission Viejo is actually so much more. Known for its beautiful tree lines and majestic reservoir, the city is home to two beaches, as well as a large marina and boat landing.

Residents of this lakeside town enjoy fishing, boating, and swimming. Summer concerts are also popular among the locals, creating that at-home flavor and ambiance.

If you need to get out and stretch your legs, consider a hike along the Oso Creek Trail or, better yet, tee off at Arroyo Trabuco, one of the area's premier golf clubs.

While the city doesn’t rank as high as Irvine, it is still one of the safest places to live and raise a family. 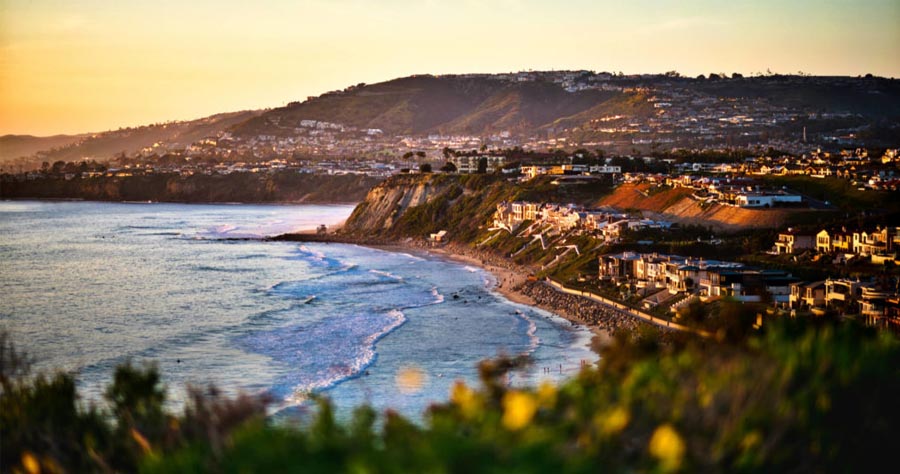 A popular cruise destination for tourists looking to dolphin or whale watch, Dana Point is also one of the perfect places to settle down in Southern California.

Sandwiched between Salt Creek Beach and Doheny State Beach, this hidden gem is nearly halfway between the larger urban epicenters that are Los Angeles and San Diego. Smaller than other contenders, the city hugs the Pacific Ocean and is surrounded by pronounced coastal bluffs.

Residents can be found looking over the Dana Point Harbor from one of its many notable landmarks. Nearly 2,500 boats can be seen along the water, as well as patrons sampling the fare of local restaurants and boutiques.

Relocating to this smaller town will be almost too easy. Overall, the town is economically and ethnically diverse, benefiting from the local tourism industry. 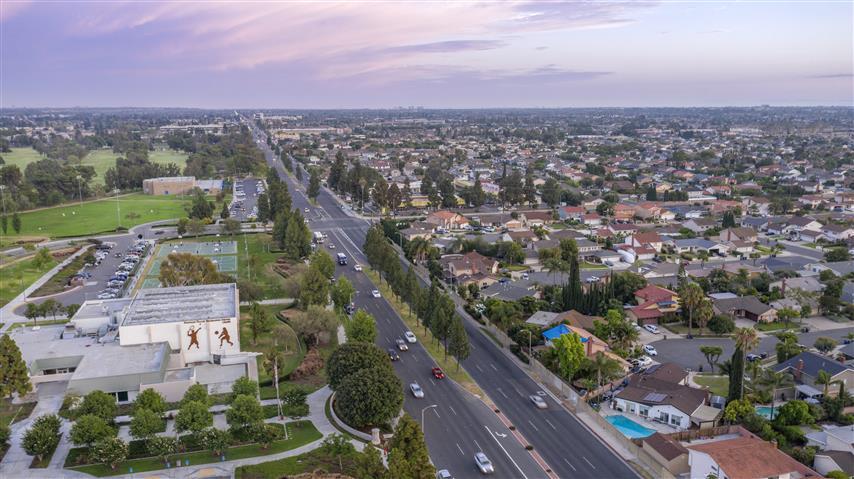 Southwest of both Santa Ana and Anaheim, Fountain Valley is a landlocked, upscale middle-class area. It hosts numerous parks and recreational spots, as well as three 18-hole golf courses.

With a strong economic foundation Fountain Valley has weathered some of the economic headwinds brought about by COVID-19 better than other towns it's size. In fact, unemployment remains lower than the national average, sitting at just 3.3%.

The Reptile Zoo and Beach Boulevard are two of the more popular attractions that residents like to frequent. Fountain Valley is also close enough to Disneyland and other local amusement parks that there is always an adventure waiting for those looking to have fun.

The city also attracts a lot of business professionals being that it is a short commute to the John Wayne Airport or downtown Anaheim. 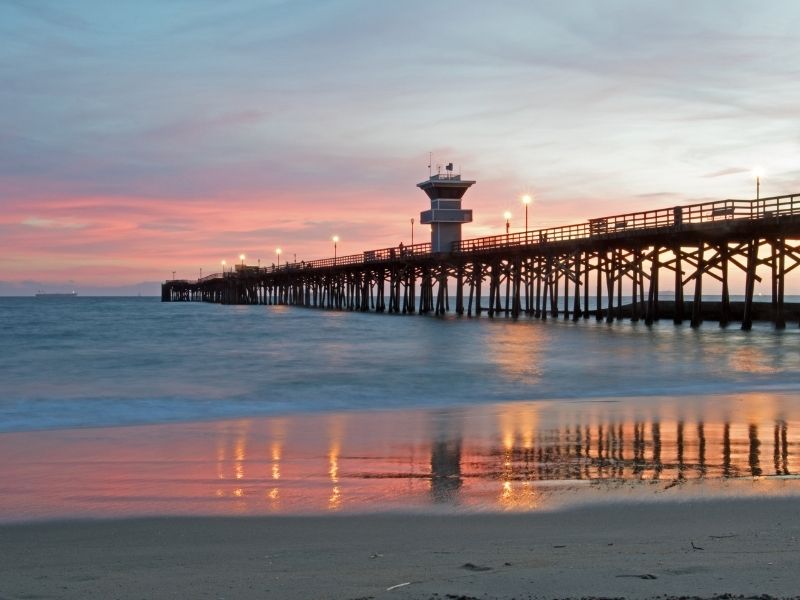 Named for the animals that frequent the nearby waters, Seal Beach is the perfect laid-back coastal community for beach goers and city folk alike.

Unlike its neighbor to the northwest, Seal Beach attracts smaller crowds compared to some of its coastal counterparts. Home to roughly 25,000 people, residents enjoy quiet sunsets as the backdrop to its famous long wooden pier.

Along its Main Street you will find many locally owned restaurants and small businesses, such as Walt’s Wharf and Knock Knock, the famous surfboard shop. While people are building new luxury single-family homes in the area, a lot of the residences are condominiums and co-ops.

If you are looking to settle down in a quieter area of California, but don’t want to sacrifice being surrounded by the natural beauty of the water and sand, Seal Beach is a quaint town with a lot of charm.